skip to main | skip to sidebar

So I think I have most of it set up... I am moving over to wordpress as I like some of the options over there. Here is the link. come check it out.
Posted by Angela at 6:53 AM No comments:

I have been working on baking and cooking more and more. This week I made Calzones for supper. I made the pizza crust and set in on the stove to rise. At the same time I turn on the oven to begin preheating it. My mistake...I did not realize that I set the bowl on the burner that vents the oven. I came back 20 minutes later to check my dough and then went on the split it and roll it out and the dough on the bottom of the bowl was baked. I was able to save most of the dough and toss the baked stuff before others walked in the kitchen, but I have learned my lesson... make sure the bowl of dough that is rising is not on the burner that vents the oven.
I am fairly new to the kitchen and I am an over all klutz. Mishaps seem to fallow me every where, yes even into the kitchen. This is nothing new to my family, I was really glad I was able to save most of it. I also did not burn any thing that night. That is a trade mark for me, I am so afraid of under cooking something and getting everyone sick that I tend to make sure everything I cook is well done. I did not burn these... I was very proud about that.
If you want some great recipes go and check out Home Ec 101. I get 3-4 of my meals a week from that site, yes some are repeats, but when you have children and you find a recipe they love it is a great thing.
Posted by Angela at 9:56 PM No comments: 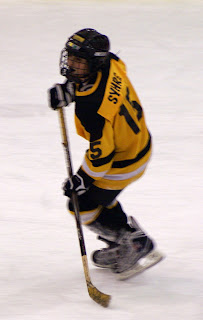 This year we got the sew last names on their jerseys. This is super nice as you can better know who is playing. It is really hard to tell with their helmets on. 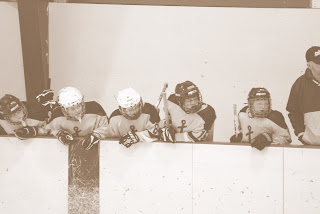 I just love this picture... it had to been a good play they were watching. Gabriel is the second black helmet from either side. 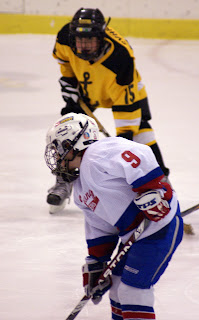 This was the Squirt home tournament. I am still working on getting some pictures on Logan. Gabriel has two more tournament, My dad and Todd will be taking him to Mitchell Feb 13-14 and then we are in Brookings March5-7. Logan also has two more tournaments, Aberdeen Feb. 7-8 and Watertown (home) Feb. 13-14. The season is so busy, but seams to go so fast.
Posted by Angela at 5:03 PM No comments:

Here is what is on the menu for this week...
Chicken Curry
roast w/mash and HM bread
Bacon Cheeseburgers
Calzones
Chicken Strips w/ fries
We will be gone this weekend for a hockey tournament, so I only need five meals and hopefully some left overs for lunches.
Posted by Angela at 8:32 PM 1 comment:

Here is my plan for the week... we got some help with food money so I am taking and planning some good homemade food for us. On to the list...
Thai noodles with shrimp and bean sprouts
Pizza
Country style Cube Steak
Chili
Chicken Curry
Taco Soup
beef roast with potato bread
We have hockey every day but Wednesday, so these meals are meant to be quick or slow cooked and we will be making the pizza Wednesday as that takes a little longer.
Posted by Angela at 9:33 AM No comments:

I could not show some of these before Christmas due to them being presents, but I though I would share some of the gifts I made this year. I for got to take pictures of all of them. 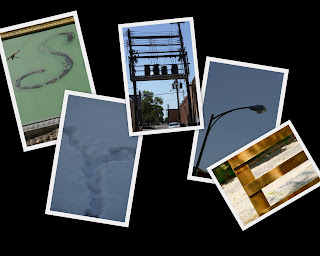 I made these for some of my gifts this year. They had different names and saying of course. They were 8x10s and put into a thin bordered frame. 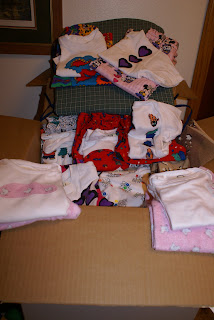 Here we have 12 pairs of pajama pants, 8 appliquéd t-shirts and a high-chair cover I made for my sister. The pajamas were given as gifts and the high-chair cover was for an old wooden high chair that was in need of some cushion. I later made the second high chair cover for her other high chair.
I also made fleece I spy bags, crayon rolls and make-up bags to give as other presents (those were the ones I forgot to get pictures of). They turned out great. I used a mixture of tutorials, I found on the web. Pick out what I liked about each one, added my take on it and came up with some great presents. I will defiantly be making more of them and hopefully remembering to take pictures. I also whipped up some cup cozies, but those were more of a distraction job for me then anything. They also turned out great after a few changes.
Posted by Angela at 6:38 PM No comments: 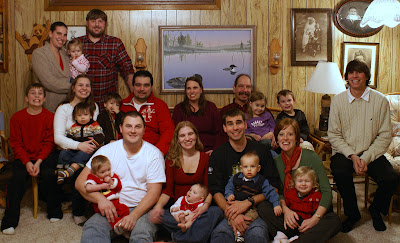 We had a great Christmas and it was nice to spend time with family we do not get to see much.

As Christmas creeps closer and closer I thought I should make and list and check it twice. I feel good that I have completed enough and should not have a mad rush Christmas eve. I have also managed to make all the gifts given to Todd's side of the family and about half of my side. Next year I might have to try for 80% of gifts made, but I am going to have to find some more great ideas for that to happen or learn to knit.
All hand crafted gifts made-Check
All presents in SD wrapped- Check
All presents in MN wrapped- (Wed.)
Rolls made for school- check
Peppermint bark made for MN- check
House clean-
*bathroom-check
*entry-
*kitchen-
*living room-check
*kids room- check
*parent room- check
Dog bathed- Check
Kitty liter cleaned- (Tue)
Bags packed- (Tue)
Laundry done- (Mon)
Diapers washed- (Tue)
All gifts bought- Check
Truck Packed- (Tue)
Posted by Angela at 5:23 PM No comments: 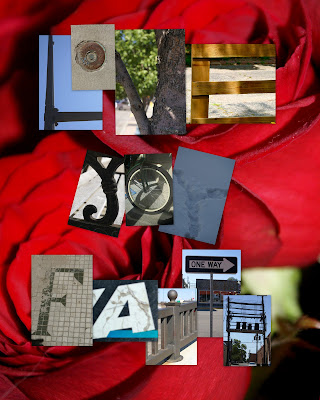 Posted by Angela at 9:51 PM No comments: 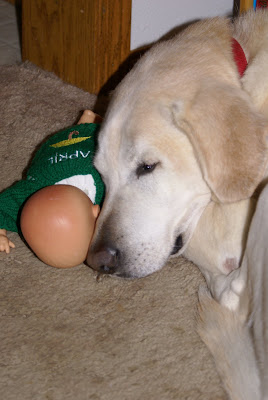 Todd and I were at the computer the other night, we looked back at that the and this is how we found her. She had found one of the girl's dolls and cuddled up with it. She was sleeping. I was able to get my camera and take a few pictures and she did not move. She is such a great dog! 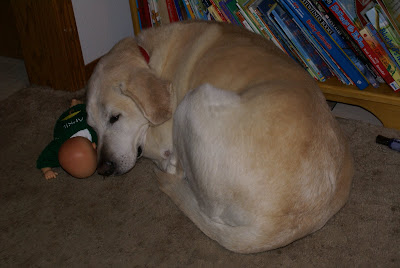 Gabriel had his school program this past Tuesday. There was about six songs and he danced in this one. He is on the very far left.
Posted by Angela at 6:33 PM 1 comment: 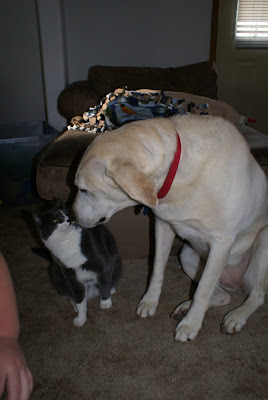 I was trying to get a picture of the dog and cat for our Christmas cards... this was the best I got. They were not happy with what I was doing and Malia was not happy I was not taking a picture of her. I got a good laugh after the fact, but it did not make it to our card.
Posted by Angela at 8:14 PM No comments:

HAPPY THANKSGIVING
The list would be a mile long on things I am thankful for. 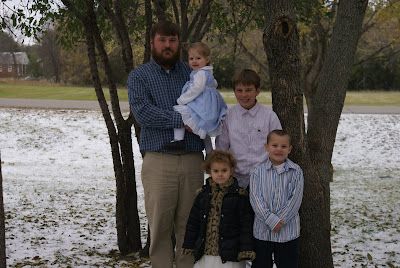 This picture about sums it up though.
Posted by Angela at 10:49 AM No comments: 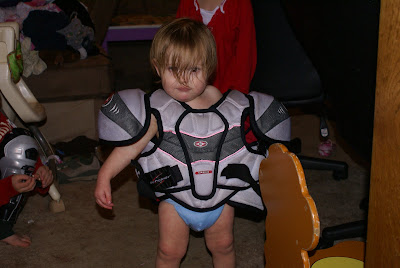 Malia stole Gabriel's hockey stuff while he was trying to get ready the other night, instead of taking it back he decided to take a picture. How cute is this little hockey player? When we are at hockey if the doors to the ice are open she seams to always spot it and bolt for them. I or some one else has always caught her though.
Posted by Angela at 10:27 PM No comments: 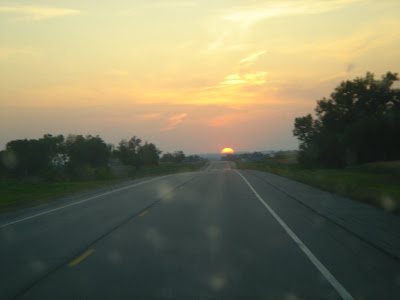 This was taken back in September on our way home from Minnesota. It was a great sunset, too bad the bugs were so bad. This is on Hwy 212 I think right before the South Dakota boarder.
Posted by Angela at 10:07 PM No comments: 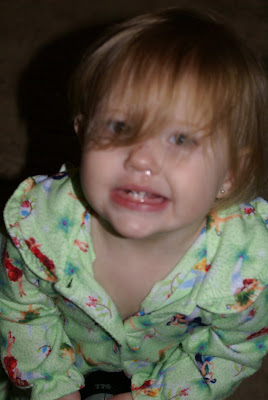 My husband and I are in constant discussion over this. He would like he hair cut so she has bangs and I want to to grow out, like our other daughters did. I think it would be more work to have to trim her bangs all the time and he does not like to see her hair covering her face. If only berets accutauly stayed in her hair for more then 30 seconds.
Posted by Angela at 7:26 PM 2 comments: 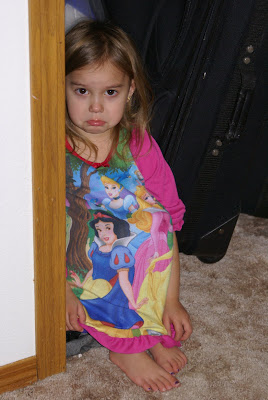 My parents have a few pictures of me like this, I found Hailey like this and flashed back to those pictures, so I had to take one of her.
Posted by Angela at 1:39 PM 1 comment: 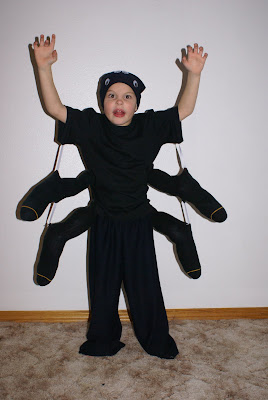 Logan has been telling me what he has wanted to be for Halloween for many months now. The only problem, it has been something different each time. Earlier this week I asked him and he said a spider, so I got to it and made him a spider costume before he could change his mind again. I hope he still likes it Saturday. My mom gave me a bunch of fabric a month ago and in that bunch of fabric was some nice black sweatshirt material. I used this for the pants and the hat. I bought the t-shirt on clearance and the socks were Todd's (he does not dress up much, so we put them to better use). I also had to buy the Googley eyes for his hat, but his costume came to less then $4.
Posted by Angela at 10:09 PM No comments:

We spent some time outside enjoying the nice fall weather. 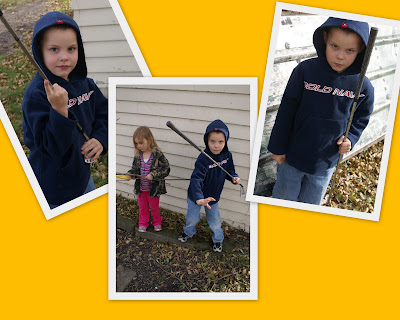 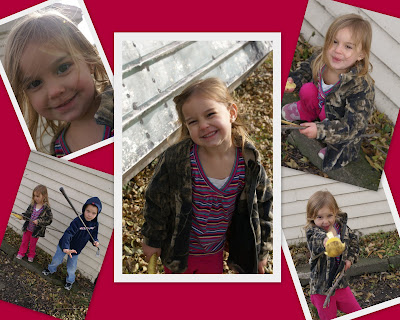 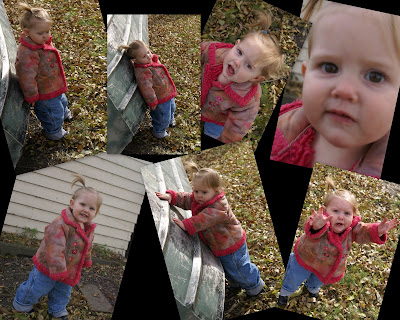 Posted by Angela at 9:03 PM No comments:

Posted by Angela at 7:10 PM No comments:

I do love you so, but you need to start sleeping on your own and not attached to me. Thank you very much for your understanding in this matter.
Love,
Your Very Grateful Mom
Posted by Angela at 11:16 PM 1 comment:

Hailey All Dressed up

Thought I would just some of the pictures I took Saturday at a beautiful wedding. Hailey was one of the flower girls. What a great day that was!
Posted by Angela at 10:36 PM No comments:

One of my projects this summer was to make a t-shirt quilt for my little brother. He graduated from High School this year and for his gift I made him a quilt for his bed at school. I used about 19-20 t-shirts and then some fabric. For the backing I used fleece to make it nice and warm. There is medium weight batting inside, so that along with the fleece there is a little poof to it. I hand quilted it as sewing around the outside was too much of a work out for my sewing machine. 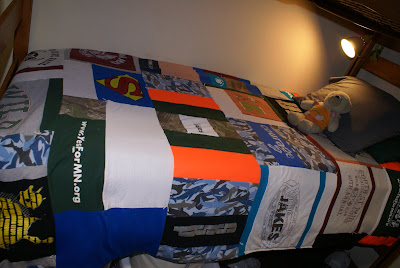 Out of two of the t-shirts (they had smaller logos) I made the girls skirts. To do this I cut the t-shirt from the bottom up to the length I wanted it+1.5 inches. After that you measure down 1.5 inches and fold it in and sew it up, leaving an opening to put the elastic in. I also sewed around the top of it before putting the elastic in. I used 3/4" elastic. Sew the hole shut and sew a few places verticaly and you have a cute little girls skirt. 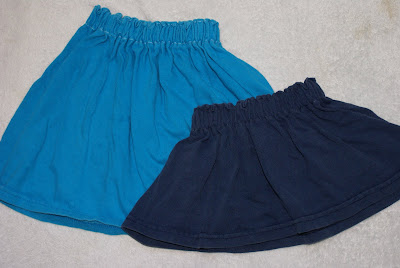 out of the mouth of Logan... 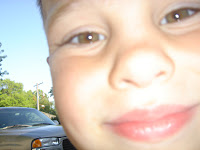 This afternoon I was trying to get Logan to do something for me. I had asked him a few times and it was just not happening. One last time I asked him to please listen to me and do what I asked. He looked me in the eye and said, "Mom, I have to listen to my teacher all morning, do you really expect me to come home and have to listen to you, too?" I informed him that he indeed did and he was not very happy about that, but I got him to do what he needed to do. It is also good to know that he is listening at school.
Posted by Angela at 6:23 PM 1 comment: